Detailed programming to get the most out of it
Those who simply load up a patch and begin to play may find themselves underwhelmed.
Django chunking style is not built-in to the strumming engine and requires some careful programming to achieve

Many libraries out today quickly hit a wall of diminishing returns when it comes to realism. This is not the case when it comes to the new Evolution Django Jazz guitar by Orange Tree Samples. There is a learning curve, but once mastered, this instrument will give you the authentic sound of Django-style jazz guitar creating a near life-like performance.

The Evolution Django jazz guitar is the latest release in a recent string of outrageously high-quality sampled guitars by Orange Tree Samples. It attempts to capture the nuanced sound of Django Reinhardt’s iconic and genre-defining playstyle. The samples were recorded with a recreation of Django’s own Selmer 503 guitar. This Kontakt Player instrument is arguably the only product on the market today capable of achieving this sound – short of hiring a real guitar player.

The first time I jammed with my first semester college roommate at Berklee, I remember him opening his guitar case to reveal a strange kind of guitar I hadn’t really seen before. Its distinct small soundhole along with steel strings on what I expected to be a nylon string-sized instrument combined to create this rather striking and uniquely classy sound. It was a Django jazz guitar: A Selmer. It also didn’t hurt that he was one of the best guitar players I’ve ever heard in real life. 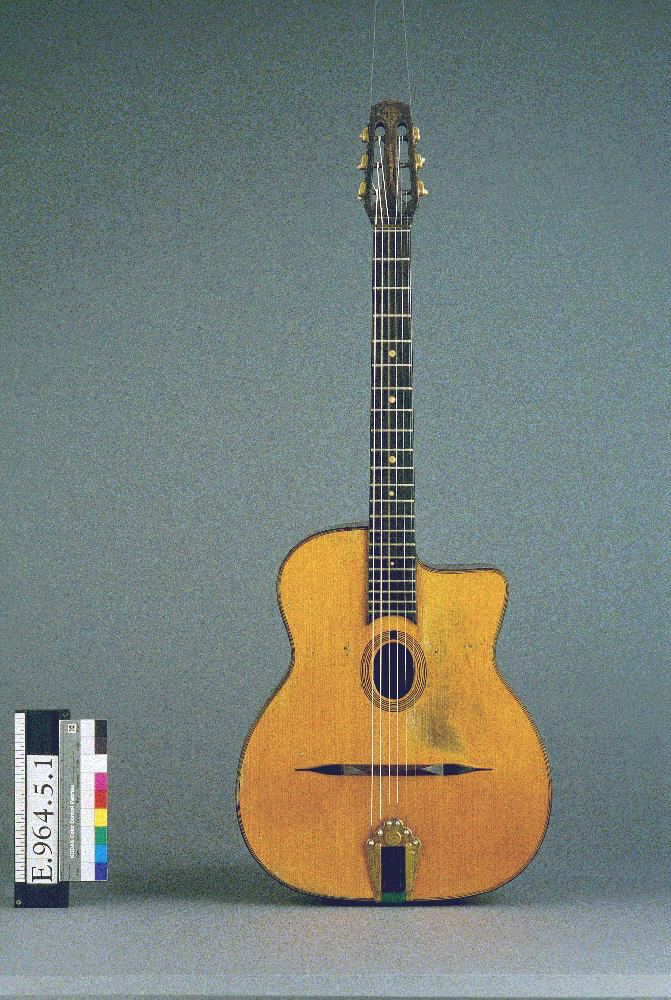 The style of sound I was hearing from this instrument was the iconic buttery sound of the 1930s french jazz scene. It was a style defined by twisting virtuosic chromatic lines overtop of insistently and hypnotically consistent straight-four chunky rhythm guitar. This was the first time I had heard this sound and never something I could have imagined could have been reproduced with a sample library. Enter the Evolution Django Jazz.

Orange Tree Samples seem to have really nailed down how to sample guitars. More than this, they seem to appreciate that each style of guitar is so unique that it would be impossible to create a product that could do it all. This is the reason for such a unique instrument.

Even if you had the best electric or standard acoustic guitar sample in the world, you would still have a hard time reproducing Django jazz. This product allows you to do that. It’s important to note that this style is, by its nature, virtuosic. This means if you don’t know how to play this style, simply owning this instrument won’t allow you to sound like Django jazz. Some libraries may serve in part as compositional aids or crutches. This is not one of those libraries. With that out of the way, if you know what ought to be played and are willing to invest the time carefully programming it, it’s absolutely possible with this instrument. I say invest the time because that is required. As high quality as this instrument is, it’s not instantly playable. It will require careful articulation switching and doubling and fine control of velocity in order to create a passable performance.

Though I am fine with this, one area I did find myself disappointed is its lack of ability to quickly generate the iconic straight-four chunking chord comping. The Orange Tree Samples guitars all have a strumming engine and when I opened this instrument, I excitedly navigated over to it wondering if they had a preset where I could simply hold chords and out would come realistic Django chord chunking. It wasn’t there.

They include an instrument snapshot designed to help you program this sound but it doesn’t do the work for you. I downloaded the midi demos they include, one of which features this comping style, to take a look at how they did it. The midi was surprisingly busy. They achieve the sound with a combination of techniques including doubling in unfretted ghost strums on top of other note attacks. This works really well and the sound they get sounds pretty real. In the context of a full mix, it would be really hard to know it wasn’t a real guitar playing this. I was, perhaps naively, hoping their strumming engine would have somehow achieved this in a more automatic way. Perhaps this is still out of grasp at the moment.

Bad user interfaces can make an otherwise great library clunky to use. This is never a problem with any of the Evolution guitars! Orange Tree has a consistent, clean, and functional UI across all of their products. It’s intuitive to use and easy to look at and understand what’s going on. The front page of the instrument greets you with a list of articulations. This is the bread and butter of the instrument. The list is vast and detailed including your basic sustain samples and continuing to palm mutes, harmonics, slides, hammer ons, power chords, etc. By switching between these, you can absolutely create a very convincing guitar performance.

Once you’ve crafted your performance, you can head over to the tone panel where you’re given access to FX such as distortion, tremolo, wah, reverb, EQ, compression, chorus, flanger, delay, and amp modeling. Through a combination of these FX, you can go a long way towards crafting a unique sound. It’s worth noting that, for those who don’t love to tinker with FX, the instrument includes a collection of snapshots each with a unique feel. These are great either as they come, or as a jumping-off point for your own custom presets.

If you’re hoping for one note push-and-play to create the Django jazz guitar sound, this product isn’t for you and you. However, if you learn the capabilities of this vast and detailed library, you will be rewarded with the ability to create hyper-realistic Django jazz style guitar.

We may not be “there” yet in terms of playability and ease of use, but this library arguably represents the farthest we’ve ever come in terms of sampled guitars in my opinion. What I hope to see in the future from Orange Tree Samples, is for them to build on the fantastic instruments they’ve already made and perhaps create some kind of scripting add-ons that allow for some of the meticulous programming and heavy lifting to be done for the user. Until then, for those willing to take the time, their products are outstanding and won’t disappoint.

The Evolution Django Jazz by Orange Tree Samples weighs in at 6.28 GB, compressed down from 12.3 GB of 24-bit samples. It features a large collection of articulations including sustains, palm mute, harmonics, slides, legato performances and more. These articulations can be changed using a variety of methods including key switching or note velocity. Each articulation features 3 dynamic layers with 2 round robins. The instrument’s UI is divided into the performance panel, the Strum engine, the Chord engine, Tone, and Set Up. These allow full control over the performance and the sound of the instrument. The library features a collection of instrument snapshots created with Django-style jazz in mind. The library requires Kontakt version 5.8.1 and is fully compatible with the free Kontakt Player.

Contributor Shaun Chasin reviews Evolution Django Jazz by Orange Tree Samples
“Many libraries out today quickly hit a wall of diminishing returns when it comes to realism. This is not the case when it comes to the new Evolution Django Jazz guitar by Orange Tree Samples. There is a learning curve, but once mastered, this instrument will give you the authentic sound of Django-style jazz guitar creating a near life-like performance..”