Noir offers a sleek two page interface that matches the previous ostinato libraries for quick and familiar playability.
The sample phrases come in Major, Minor, inversions and extended.
The arpeggio engine houses six of the most common ostinato patterns in high and low combinations. It can be mixed for either unison or syncopated play.
It also has a sustain patch for additional character and layering design.
Noir also boasts a woodwind and brass section (something its predecessors did not have) for a genuine classic Hollywood crime drama.
The options page located on the bottom center label provides complete control over volume, panning, microphone positions, arpeggiator
and my favorite feature harmonic shift. Not many libraries offer such automated control for such a specific use library making this a huge PRO!

This is a niche library tailored to classic Hollywood crime/drama
I would have liked to see an envelope shaper for the sustains patch.
You can control volume with the Modwheel, but it does not resolve to silence making movement from chord to chord sound a bit halting and not succinct.
The harmonic shift feature which plays chord progressions on 12 green keys signature is a time saver, but 49 key pianos will have to shift octaves to use all piano keys. This may hinder some in their style of play and recording.

The golden age of Hollywood suspense is back and up to no good. designed for composers looking to create the emotion and mood of old Hollywood.

Jump to the Videos of Ostinato Noir by Sonokinetic

Jump to the Demos of Ostinato Noir by Sonokinetic

Noir is the fourth installment in Sonokinetic’s Ostinato Series and while it may look like it’s predecessors it’s not! The entire backend of the library has been overhauled to produce smoother, elegant and realistic ostinato motifs. Recorded in the same music hall as previous libraries Noir generates immediate classic Hollywood fare. It blends perfectly with other phrase libraries such as Minimal, Sotto, Capriccio and its big sister phrase library, Noir. This library is designed for composers looking to create the emotion and mood of old Hollywood. Composers drawing inspiration from the likes of Bernard Herrmann (Psycho) and Max Steiner (Casa Blanca) will be pleasantly surprised at its authentic sound and character.

As a film school graduate and purveyor of all things old Hollywood, this library and its companion phrase library is something I’ve been wanting for a long time!

Some will say strings are strings brass is brass and so on, but orchestration is very different for this genre and rarely done with honest homage. The layering of muted trumpets and horns with warm woodwinds is what delivers that classic nuance and this has it in spades. I promise that’s not a pun suggesting that you go watch, The Maltese Falcon immediately! 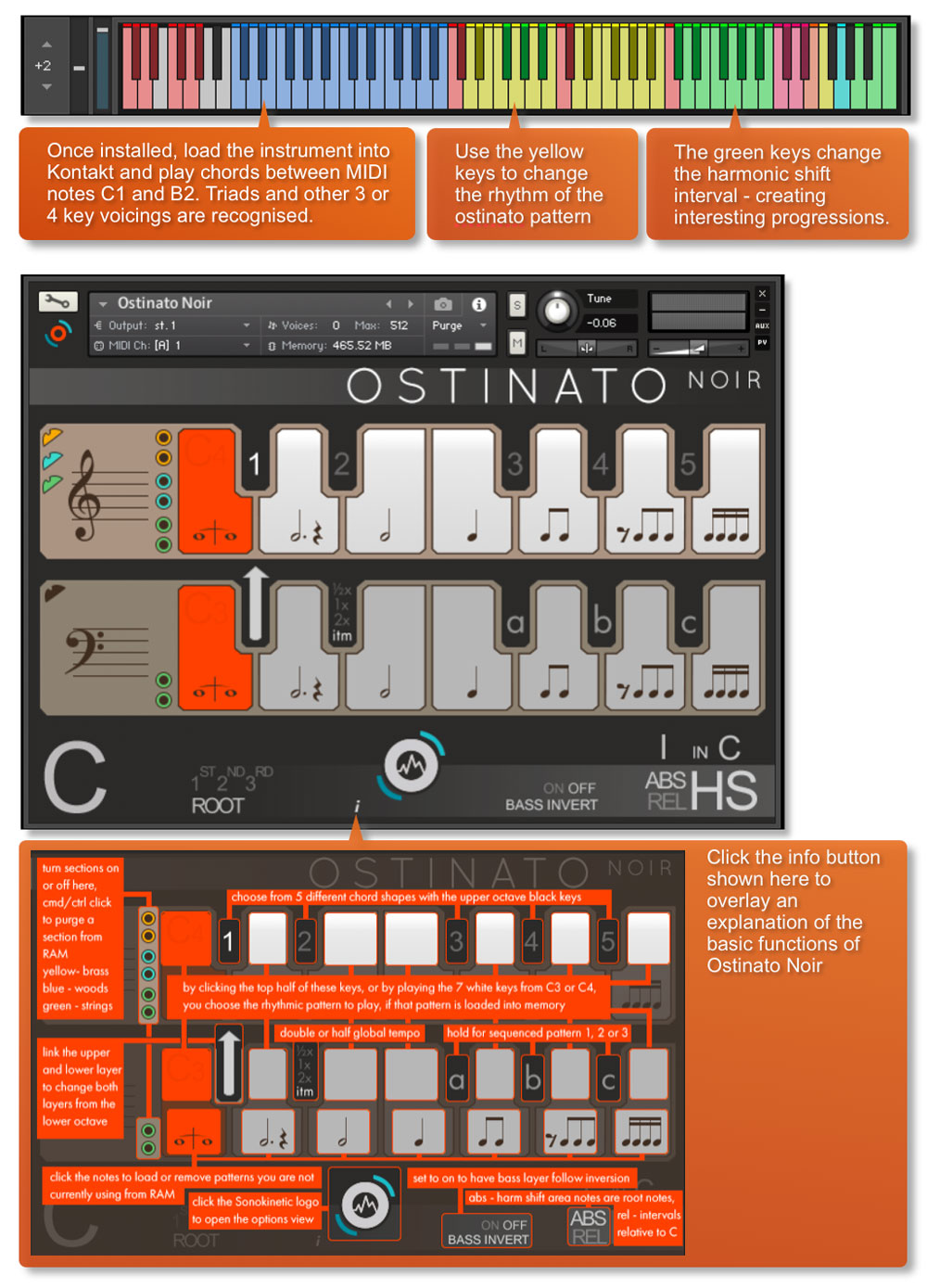 However, this instrument library is unlike anything in the marketplace. This is not a toolbox you can use for everyday scoring or spotting sessions, but it will give you something that the composer you’re pitching against won’t have; uniqueness.

Demos of Ostinato Noir by Sonokinetic

Videos of Ostinato Noir by Sonokinetic

Contributor SCOReONYX reviews Ostinato Noir by Sonokinetic
“The golden age of Hollywood suspense is back and up to no good. Dive into my latest review of Sonokinetic‘s new line in its Ostinato series, Ostinato Noir.”