So much more than a reverb plugin. Easy to use and sounds great. The creative effects are sure to inspire users.

I am a big fan of AudioThing instruments. The developer makes unique yet usable libraries that sound great, are inexpensive and have delivered for me on a number of occasions (including the Toyota promo film I won the 2013 Hollywood Music in Media Award for!)

Fog Convolver is a convolution plugin that applies the aural character of the loaded impulse response to the sound you run through it. The plugin works in as a AU, VST2, or AAX 32-bit or 64-bit host.

An impulse response is a sound recording. I am familiar with impulse responses as recordings that capturing the character of an acoustic space. With Fog Convolver AudioThing has captured over 250 impulses included as preset impulse responses. These allow you to to add reverb, create effects and manipulate audio in unexpected and inspiring ways.

The 250 impulse responses included with the plugin have been created by capturing the character of spaces, analog and digital equipment, speakers, organic sources, electronic gear, spark, pistols, popping balloons and so much more.

The plugin is easy on your ram and has a pretty small footprint. For sound designers and those looking for a new approach to convolution, Fog Convolver is very affordable retailing for $75.00 (USD) at AudioThing.net

It’s one thing to have a nice convolution plugin that you can load impulses responses into, but Fog Convolver is so much more.

The effects plugin offers controls you would expect (pre-delay, wet, dry, hi & low pass) as well as some extras that make all the difference (stretch, start & end truncate, start & end fade in and curve) AND a handy Rev button (which flips the impulse in reverse).

On top of that Fog Convolver shows you the wav form in the center of the interface, and allows you to listen back to the actual sound of the impulse response you have loaded with the handy PLAY button.

There is also a “Randomize” button that will randomly set all your controls for you.

You also have a “more” button which gives you access to Global Settings. The Global Settings allow you to configure a number of settings including head and tail bock buffers. Dividing the processing into 2 different section is the secret in the sauce that allows Fog Convolver to be such an efficient plugin to provide real-time effects allowing great performance from your CPU. 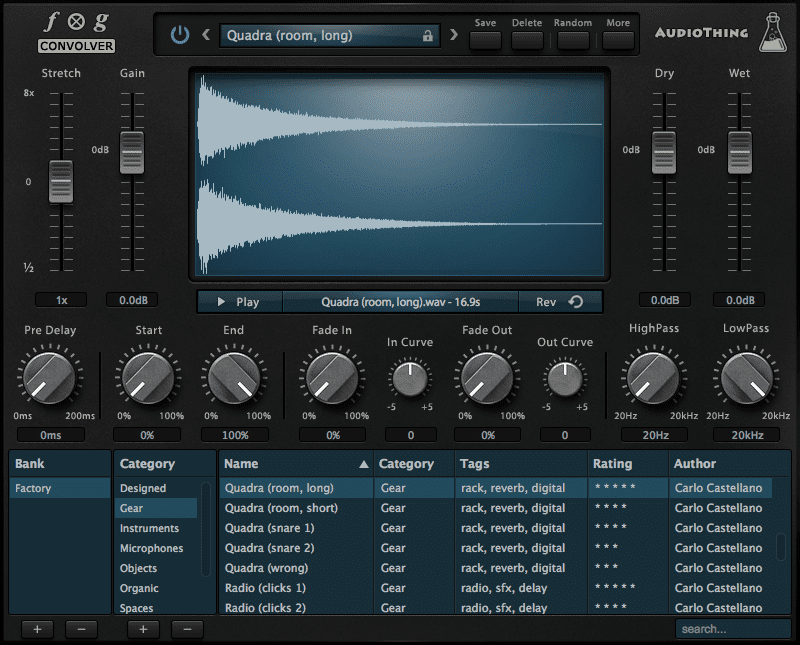 It’s one thing to have a nice convolution plugin that you can load impulses responses into but Fog Convolver is so much more.

Wonderfully useful for sound designers and musicians alike fog convolver is an easy to use plugin with loads of controls. Now Fog Convolver most likely won’t replace my hi-end orchestral reverb impulse response plugins but I have already started using it regularly as an effects plugin to get unusual effects (like turning a regular piano instrument into a beautiful pad sound) and really shines as an inspirational tool.

I am a composer creating score and song for advertisements, films, television & interactive. I use virtual instruments and sample libraries daily in my work. www.DonBodinMusic.com
CHECK THESE OUT
AudioThingeffectsreverb
AudioThing release Frostbite 2
Overview: The Orb from AudioThing (released with special intro price)
5 UNDER EP 4: 8 Bit / Chiptune Sample Libraries
Review miniBit 8 bit chiptune plug-in from AudioThing
Demos & Walkthrough: GAK150 new release from AudioThing
Be the first to comment!
Leave a reply »