Fancy a musical journey across Europe, Africa, and Asia? Rast Sound’s ATLAS is a world music sampler with construction kits and solo instruments in one instrument with the ability to blend genres.

Jump to the Videos of ATLAS by Rast Sound

Jump to the Demos of ATLAS by Rast Sound 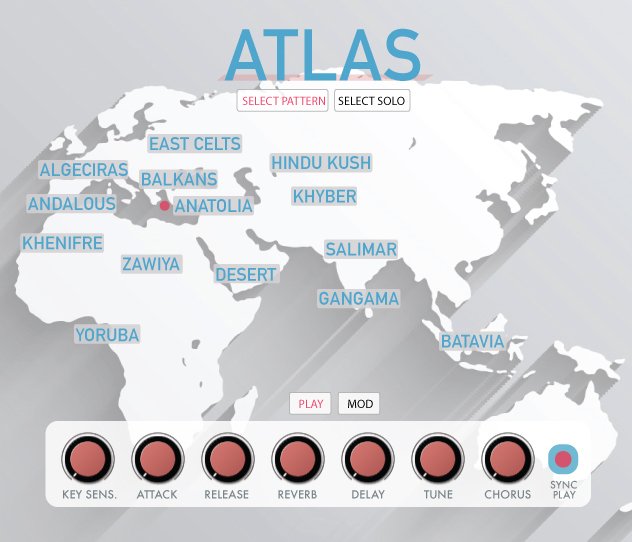 Rast Sound has created a little gem with this release. Diverse and playable, ATLAS is spot-on with regional authenticity and instrumentation.

ATLAS is an ambitious work. Sampled from 14 different countries spanning Africa, Europe and Asia the legitimacy of these world music performances. Of course, digging into the library I would have wanted to hear more regions and an alternative version for each but for the asking price of just €59 I can not complain.

During the first look, I did hear a few problem samples in the “stem” kits that needed cleaning or had a high level of bleed. I see that the dev has chosen to deliver all samples as WAVs so I may go in and clean those up myself if I need them for a project. That said I am not sure how they slipped by the dev team before delivery.

I have reached a point in my listening where world music is the place I find the most inspiring and refreshing musical ideas. Whether it is odd meter, syncopated feel, the instrumentation or the fact that most aren’t tied to a grid or a product of the DAW, it flys in contrast to much of the production music I hear on a regular basis.

ALTAS delivers a musical journey across 3 continents and is sure to find uses for many electronic musicians, DJs or those looking to add authenticity to a score.

ATLAS sells for €59 from Rast Sound

Atlas engine allows users to select & combine instruments & patterns from the different regions in one instrument split across the keyboard. The engine also uses “SyncPlay” mode to ensure all loops and phrases line up perfectly with each other in time when playing them.

Atlas does require the full version of Kontakt 5.8.1 or higher from Native Instruments.

ATLAS sells for €59 from Rast Sound

Demos of ATLAS by Rast Sound

Videos of ATLAS by Rast Sound