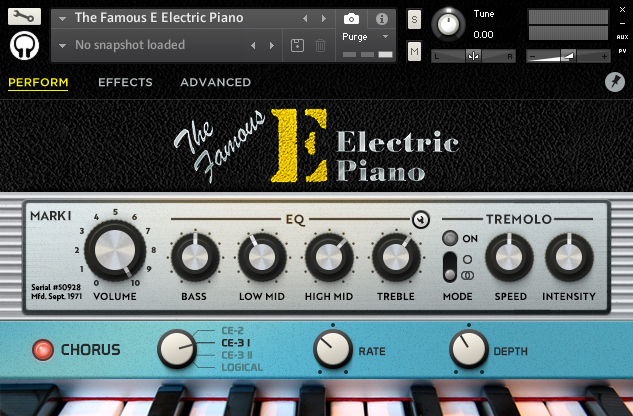 There was one electric piano that was particularly in demand in the LA studio scene in the
’80s. It was known as the “E” among producers and players, a reference to the letter “E”
that was stenciled on its case by Leeds Musical Instrument Rentals, to distinguish it from
the other electric pianos in their collection. The “E” electric piano has been featured in
many hit songs and albums, and for a good reason: its tone has a very clear, defined low
end and a beautiful, bell-like tone in the register an octave above middle C.
Until now, the “E” model electric piano has never been sampled before.

As of 2017, Orange Tree Samples has been working with George and Jay to develop the
playable instrument using the Kontakt platform. Thanks to Kontakt‘s powerful scripting
engine, many options to customize the tone of the electric piano are included, such as an
authentic model of the instrument’s built-in tremolo, multiple options for chorus effects
based on custom DSP, and a modular effects rack.

Orange Tree Samples is excited to present the resulting virtual recreation of the
instrument, The Famous E Electric Piano, so that you too can enjoy the experience of
playing the “E” electric piano.