PRAGUE, CZECH REPUBLIC: music production and audio processing advanced tools maker MeldaProduction is proud to announce availability of MONASTERY GRAND — carefully curated from 50GB of rigorous recordings capturing a beautiful stage piano in a concert hall hidden within one of the monasteries near the Czech beer capital of Pilsen, produced using multiple microphones and available to download for free as the first piano professionally sampled for installation as an aptly-named 3.52GB ‘instrument’ in its own right (replete with stand- alone settings and presets) within MeldaProduction’s MSoundFactory modular plug-in platform, itself surely one of  the most powerful virtual instruments available — as of June 24…

MeldaProduction’s market-leading MSoundFactory may, in fact, be the most powerful virtual instrument available anywhere. After all, it is based on an extremely easy-to-use WYSIWYG (What-You-See-Is-What-You-Get) per-voice GENERATOR modular engine, enabling users to add as many modules as required or desired from an ever-growing, seemingly-endless supply of oscillators, wavetables, filters, samplers, drum generators, per- voice effects, and various utilities. Users are thoughtfully freed from the tedious process of having to connect multiple module inputs and outputs since such connections are automatically made by the plug-in platform. Put it this way: with per-voice and global modulation, full MPE (MIDI Polyphonic Expression) support, the best-sounding oscillators on the market, and a fully-modular effects engine, MeldaProduction means business… and is just getting started! 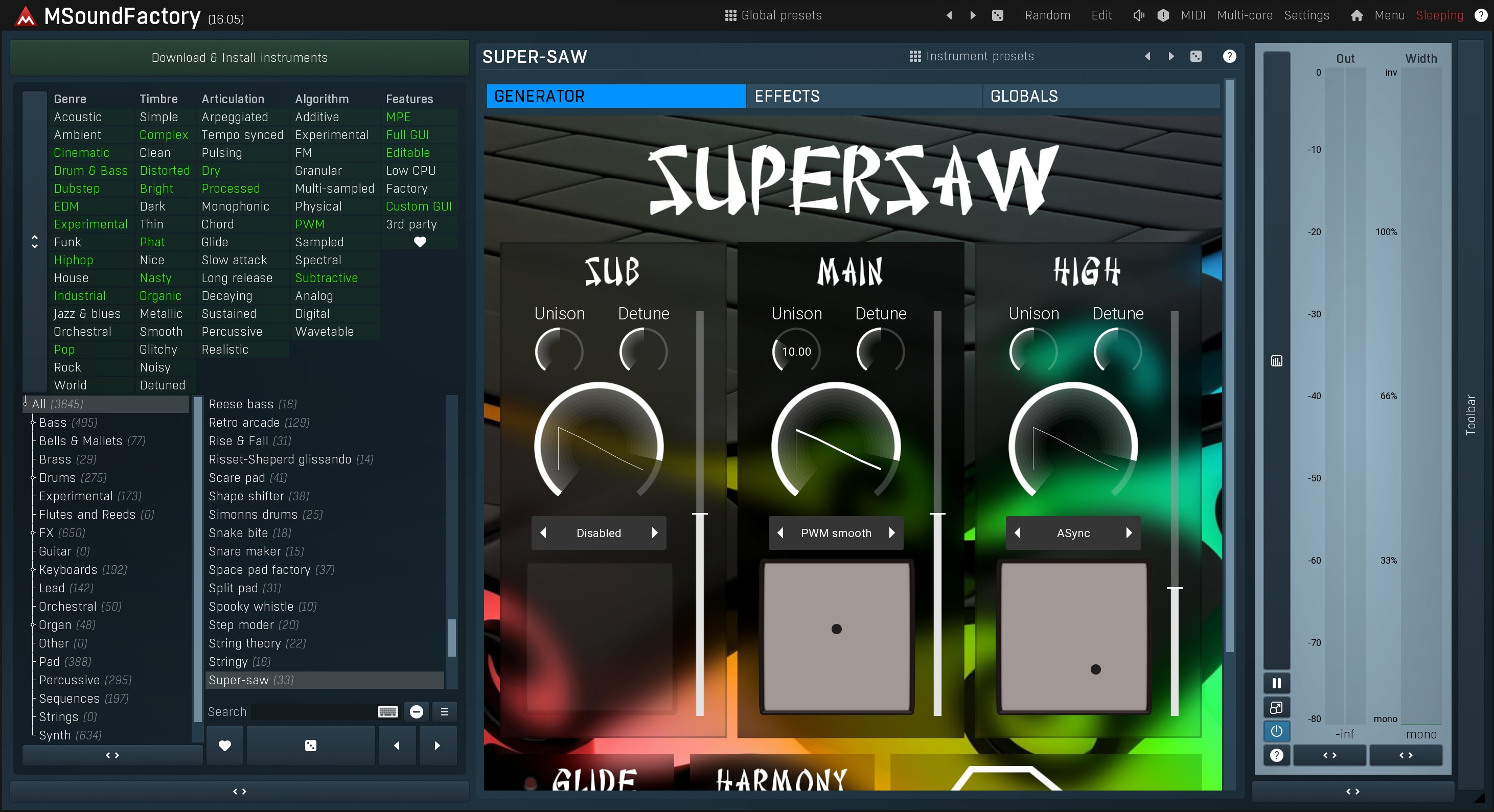 MSoundFactory, meanwhile, provides hundreds of predefined sounds available via global presets, placing it in an arena already overflowing with many other (ordinary) virtual instruments, though it is its categorised system of instruments that truly makes it stand out from (the sound of) the (competing) crowd. Indeed, in its case, an ‘instrument’ is not just a sound that can possibly be tweaked to a degree via a few macro controls but rather a virtual instrument in its own right, replete with stand-alone settings and presets. Perhaps someone, somewhere is looking for a superlative- sounding stage piano as an MSoundFactory user? No need to look any further with the timely introduction of MeldaProduction’s MONASTERY GRAND!

Duly designed with modern pop and rock music production in mind, the aptly-named 3.52GB ‘instrument’ in question is ideally suited to any music style, thanks to its creator’s careful curation of the best-sounding samples selected from 50GB of sound data from the several days of rigorous recording and subsequent weeks’ worth of processing involved in its creation, capturing a beautiful stage piano in a concert hall hidden within one of the monasteries near the Czech beer capital of Pilsen using over a dozen microphones. MONASTERY GRAND users can creatively access the resultant sound of those microphones by blending the onscreen MIKES A, B, and C slider settings. Saying that, MONASTERY GRAND is not only about samples, however — high quality as they audibly are, as it includes its own effects section comprising Compressor, Delay, Enhancer, and Reverb, resulting in an almost endless variety of sound… the sound of a classic instrument aimed at every music genre. Get this, though: its automatic HARMONY feature is especially useful for supporting styles such as EDM (Electronic Dance Music) and Latin, as well as more mainstream pop productions.

Moreover, MONASTERY GRAND comes complete with another ‘instrument’ — namely, MONASTERY GRAND CREATIVE, a unique piano based on a looped version of the original MONASTERY GRAND samples, so each key can play for as long as the user wants, while also allowing four RESONATORS and a FILTER to arbitrarily transform the piano into something completely different!

But best of all, MONASTERY GRAND is totally free for all, and available by simply downloading and installing it within MSoundFactory — also available for free, effectively, as MSoundFactory Player by simply signing up for the trial version of MSoundFactory (with all sounds and instruments included, third-party sounds fully supported, and unlimited customisations), which defaults to MSoundFactory Player (with limited sounds included, third-party sounds fully supported, and no customisations) after 15 days. It is worth noting that MSoundFactory LE (all sounds and instruments included, third-party sounds fully supported, and limited customisations) and MSoundFactory itself are currently reduced to €99.00 EUR (inc. VAT) and €199.00 EUR (inc. VAT), respectively. Regardless of which version anyone opts for, free-for-life updates (including new instruments like MONASTERY GRAND) means MeldaProduction’s MSoundFactory modular plug-in platform puts a free-flowing source of superlative sounds — sample-based or otherwise — into the hands of owners of supported Windows (Vista / 7 / 8 / 10, 32-bit or 64-bit) VST / VST3 / AAX compatible hosts (32-bit or 64-bit) and macOS (10.9+, 64-bit only) VST / VST3 / AU / AAX compatible hosts.

Having said all that, then, entering the most musical of monasteries with MeldaProduction’s MONASTERY GRAND is surely a no-brainer like no other, so set your web browser for the heart of MSoundFactory (https://www.meldaproduction.com/MSoundFactory) and go get it for free!