This is a unique bundle that brings you an enormous range of Impacts, Booms, Whooshbangs, Risers, Downers, Drones, Reverse FX and much more and are available in both Kontakt & WAV format!

For a limited time, you can get the library bundle for a deep discount of €69 (reg €189.00). Or, grab one of the libraries on a discounted price.

The library has been designed to effortlessly layer in with your workflow, allowing you to load in a few Kontakt patches or drag the open WAV files into your DAW to give your tracks that modern hybrid sound.

Based around a custom Native Instruments Kontakt 5 script, Project Alpha allows for quick and easy customization of any of the library’s patches.

You have the ability to add and manipulate a range of FX at the click of a button, as well as the option to easily EQ out unwanted frequencies or adjust the amp and filter ADSR. All of this is laid out on a single synth-like front panel, making it very fast to pick up and start tweaking.

Also built into the custom GUI is a flexible ostinato-style step sequencer and gate sequencer allowing you to easily turn any of the library’s sounds into a rhythmic sequence. 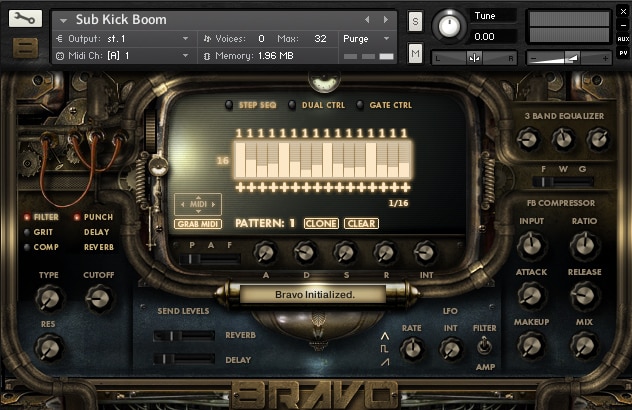 Features include a custom ostinato-style step sequencer and gate sequencer, as well as an all new Dual Control sequencer, which allows you to transform any sound into a kinetic, pulsing rhythm.

Also included is an incredibly useful MIDI drag feature, which allows you to turn step sequencer notes into a MIDI file that you can drag to your host DAW, right from the front panel! This is great for very quickly layering Project Bravo sequences with other libraries.

A range of FX, EQ and Compressor are all accessible on the front panel. The one-page philosophy returns with Project Bravo, making the library very fast to pick up and start creating.